Phuket beaches are world renowned as some of the most beautiful in the world. You’re probably coming to Phuket at least in part, for that reason! White sand, small waves or sometimes glassy, and the ultimate in relaxation or wild nightlife… all describe the beaches you’ll find on Phuket Island. With over 50 beaches to choose from, you’re going to have an incredibly good vacation. You’ve picked the right spot! 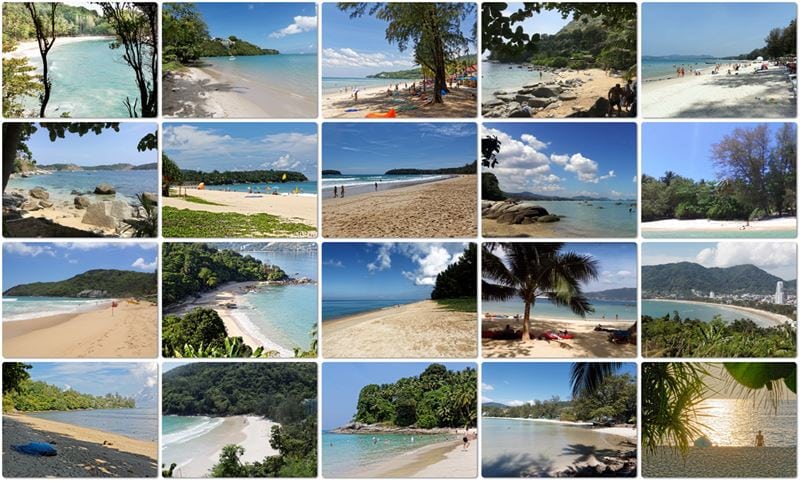 Phuket Island – What is it?
Phuket Island is one of the smallest provinces of Thailand, and the largest island in the country by far. Thailand’s next biggest island is Koh Samui off the coast of Surat Thani, at around half the size of Phuket. Most islands are hilly, and Phuket is no exception with seventy-percent of the island being mountainous and hilly, and the rest is plains and valleys where most people live. Phuket is absolutely filled with amazing beaches you and your family can explore. Read on to find out more!

Where is Phuket?
Phuket island is a 49-kilometer-long amoeba-shaped island in the Andaman Sea just south of Phang Nga province and connected by the Sarasin bridge. Krabi province is east of Phuket across Phang Nga Bay at only 34 kilometers by air. There is no flight connecting the two places, presumably to allow taxis and boat ferries to make money as well as the airlines. If you want to fly to Phuket from Krabi, you’ll need to fly 800 kilometers to Bangkok, then 800 km. back down to Phuket. If it seems ridiculous, well, this won’t be the last thing you’re scratching your head about after arriving! You’ll be happy to know there are direct flights from Phuket to Koh Samui and Pattaya.

As mentioned, Phuket has over 50 beaches on the mainland alone that you can visit during your vacation if you have the time and motivation!

If that isn’t enough for you, there are 32 islands surrounding Phuket’s mainland that are also part of Phuket province that you can visit.

Most Phuket beaches are bays with rocky outcrops at either end and surrounded by hills – big or small.

The west side of Phuket has the most stunning beaches you may have ever seen in your life. The entire west coast is covered with white sand beaches great for swimming, snorkeling, surfing and other water activities. Many of Phuket beaches are kilometers long and lined with ironwood and palm trees. West coast beaches enjoy the famous sunsets Phuket is known for, and it’s fair to say most people on the island are on the west side where Patong Beach is.

The east side of Phuket Island is much less rocky and marshier in general, with lots of mangroves rather than beaches. East coast beaches also have a lot of mud mixed with the sand, which is great if you’re a local looking for clams and crabs, but not so great for tourists. The snorkeling, swimming, and surfing is not generally very good on the east side, but there are some exceptions to the rule. Some amazing idyllic beaches on Phuket’s east coast that are worth mentioning are: Laem Ka Yai; Laem Ka Noi; and Cape Yamu Beach.

There are said to be 600,000 people living on Phuket Island, and the population is growing dramatically every year. Who lives on Phuket? Phuket locals, born and raised on the island make up a small percentage of the population, and most residents are Thais registered in other provinces who came to Phuket to build businesses in the tourism sector.

Estimates of 20,000 to 30,000 expats living on Phuket are probably not exaggerated. There are many foreign-owned businesses in the Patong Beach area especially. You can find restaurants owned by expats from all over Europe, the USA, Canada, India, Vietnam, Australia, and other countries.

One of the many good points about Phuket – the assortment of international restaurants is superb!

Six-hundred thousand people sounds like a lot until you factor in that there are also another 642,000 average visitors arriving at Phuket International Airport each month during the low season and 760,000 per month arriving during high season! The low-season slow-down is not so remarkable any longer due to Chinese and Russian visitors increasing greatly over the past few years.

So, are Phuket beaches always crowded?
It depends heavily on your definition of what crowded means to you. If you’re wondering if you’ll be able to find a place to put your beach mat down on the sand to lay down – sure – you can always find space for that, on any beach. There isn’t a beach on the island that gets that crowded except maybe Paradise Beach – a tiny little spot close to Patong that you probably shouldn’t miss.

There are so many miles of beaches in Phuket that even the 1.2 million people who are here each month, can’t fill up the beaches. If you think about it, most people in Phuket are here for the party atmosphere. At least at Patong Beach and surrounding beaches. You can avoid the crowds by going in the early morning. Most people with hangovers don’t even get moving until lunch time. You can have six hours of relaxation on a beach – maybe by yourself – until then. Most beaches don’t start seeing any tourists until 9 am. It certainly won’t be crowded on any beach at 9 am. Go early and enjoy some world-class beaches by yourself for a few hours before the crowds wake up.

In the Northwest part of Phuket Island are some exceptional beaches you might consider visiting.

In southwest Phuket, these are some amazing beaches to consider…

In the northeast of Phuket Island, there aren’t any amazing beaches that you can’t miss. This is a locals’ area where mangroves and mud marshes are the norm.

In the southeast of Phuket, there are a few beaches you shouldn’t miss if you can make the time.

The beaches we listed according to where they’re found on Phuket Island (above) are pretty much the most beautiful beaches on the island. Keep in mind that people have different ideas of what they think is beautiful. Some think white sand beaches for as far as the eye can see is the most beautiful scene. In that case, Kata Beach, Karon Beach, Mai Khao or Bangtao beaches might be considered perfect. Other people think beaches in small coves surrounded by forest, hills, and rocks are the most beautiful beaches. If that’s your idea of an amazing beach, you’ll probably enjoy Freedom Beach, Nai Harn Beach, Nui Beach, Pansea and Laem Singh beach.

Phuket’s west coast has a lot of family-friendly beaches. The six following beaches are all pretty much the same, with the exception of Patong Beach. The beaches below are long and wide and are never crowded. There are family-friendly resorts along these beaches, and the water is usually calm and fairly safe. The best family beaches that come to mind and that you should research further are the following.

Read our article “5 Best Phuket Beaches for Families with Kids under 12” to learn more.

Is there Any Good Surfing in Phuket?

The west coast of Phuket Island gets some great surf every year. Surf swells are active usually around April-May to October-November. The biggest waves are typically during the beginning and end of the ‘surf season’ – so the months above are the best to be here if you’re a surfer hoping to catch some bigger waves of 2 meters high or more.

If you noticed, there are a few beaches that pop up repeatedly on our lists above. That means you will probably have a great time here, and it will become one of your favorite beaches. Phuket often has beaches on the “Top 50 Beaches of the World” lists by travel magazines and websites. We recommend you spend a lot of time checking out the beaches of Phuket and find the ones that you like best – and return again and again, just like most people do.

This Phuket Beaches Blog and most of the published articles have been researched, written and compiled by Sepp Hatzl. Sepp started visiting Phuket in 1975, felt in love with the island, and in 1997 decided to spend most of his time in Nai Thon Beach Phuket. Sepp is happy to provide you with more specific information about all kind of Phuket topics, just drop him an email (email see in the footer).